How many designers does it take to change a light bulb? 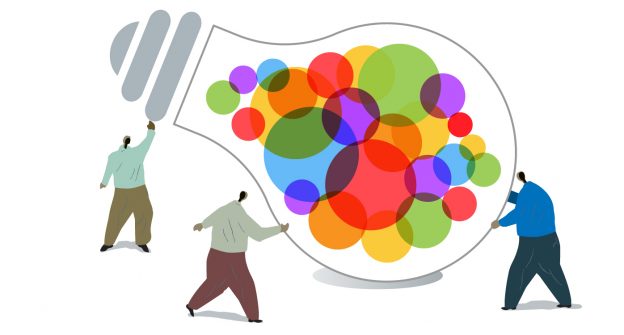 How many designers does it take to change a light bulb?
I don’t know, what do you think?

This joke always made me laugh, even though as designer I never really identified with it. At least not until a couple of weeks ago. Let me explain.

Recently I was asked by two clients to work on some rush projects. Coincidentally, both had just decided that their brand design no longer met their needs. Considering that there was no time to develop a new brand, and despite my advice to continue using the existing brand, which would at least maintain some level of consistency until a new brand could be developed, it was determined that these projects should move forward without any of the current brand elements.

On one level, each sounded like a dream job. Design whatever I want without any guidelines or restrictions. In reality, they were anything but. Throughout each project, I found myself questioning almost every idea I had and decision I made. At first I was worried that I was becoming indecisive, like the designer in the joke. But then, I realized why I was being so tentative.

As a designer, I make every decision based on how well it accomplishes the set of objectives for the immediate project at hand, and the long-term objectives as defined by the brand. Without any objectives as guidance, every decision I was making for these projects was purely subjective — based on nothing more than my personal taste. Personal taste is fine when you’re considering whether to have Chinese or Italian food for dinner, or whether to wear a blue or yellow shirt. But when developing any materials for a company, decisions can have significant business ramifications. That’s why a clear directive,  analysis, and understanding of the implications of each decision is so vital.

There’s another aspect to consider as well. To be effective, a brand has to accurately reflect the personality and beliefs of a company and accurately convey its promise to its customers. It also needs to be controlled as tightly as possible. By eliminating some or all of an existing brand’s elements, the result — whether intended or not — is a new brand. One that might not accurately represent the company, or worse, do damage to it. Further, since this “accidental” brand isn’t based on a clear set of defining elements and guidelines, it will be difficult, if not impossible, to build consistency and ensure brand correctness.

Thinking about that joke again, it needs to be updated. How’s this?

How many designers does it take to change a light bulb?
What do you want to change the light bulb into, and why?